Further to previous advice, the Shed will remain closed. Unfortunately, the QLD Chief Health Officer's public directions do not provide authority or exemptions that would allow the Shed to open.

Electronics and Communication Proposal for the Shed

My name is Jan King. I'm a permanent resident of Australia, born in Michigan, USA working as an Aerospace Engineer, not yet fully retired. I've worked on satellite and launch vehicle projects my whole life. But, I'm also one of the founders of an Amateur Radio Satellite Organization; a voluntary society. This group, known as AMSAT, has built and launched 20 satellites since 1970, mostly involving members working in their basements on satellite components.

As I will retire sometime soon, I wanted to put some of my experience to work. I thought it might be good to add some electronics skills to the Men's Shed - leading toward (maybe) an amazing capability. I would suggest doing this in about five stages or steps. We can stop at any step, and "hold" there fi folks find it too much. Each step below is harder than the previous but, it is a way to build confidence. As I have done this before I am suggesting this, knowing it can be done. I've watched it be done and I've helped make it happen. 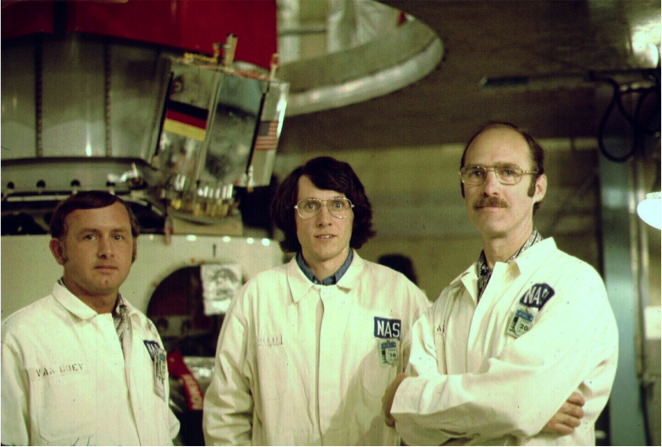 This was me (in the middle) in 1974. I was 27 years old then. I’m 72 years old now. This was the third satellite AMSAT (our volunteer organization) had built and arranged to be launched by NASA. It was assembled in my basement. The satellite is behind my right shoulder there. It’s already mounted to the Launch Vehicle (the big white thing). A month after this image was taken, this spacecraft was in orbit. It STILL WORKS TODAY! It is used for two-way communications by hundreds of radio amateurs around the world, every day. It is the oldest working satellite in Earth orbit. So, I’m proud of that. By the way, this satellite had hardware contributions from members from four countries: United States, Canada, W. Germany and AUSTRALIA! The Aussie hardware still works today – built by students who had just graduated from the University of Melbourne in about 1967. Actually, that’s something for all Australians to be proud of. The Aussie builders still live in Melbourne today. We talk regularly.

Has your data usage suddenly increased?

We have come across a couple of cases recently where data usage has unexpectedly increased. This as been a problem as these members connected to the Internet via the mobile phone system and used pre-paid SIM cards. They discovered that over $100 of credit had been used in a few days although they were only using the connection for email. The culprit appears to be Windows 10 update. Microsoft has allowed your computer to share the updates it has downloaded with other computers on the Internet, without asking you. This behaviour is optional and although the default is to enable it you can switch it off. Please see the article in How To Geek for more details.